Hi All! I hope everyone is enjoying their weekend?. If you are knocking around home doing some jobs maybe then don't forget to download the new episode 2 podcast ( details on last post) which will make those jobs fly by so you can get painting! ;)

Most weeks I attend the Christchurch Wargames Club here in New Zealand. where we play Thursdays and Sundays. I have a regular opponent, Dave and we get a game in almost every Thursday.

Against all my club opponents we have a great time ( thanks guys!) but im enjoying learning different parts of the Rules simultaneously with Dave as we add a different unit type, play different scenarios etc and therefore encounter new rules regularly.

I thought I would share some Pics with you of a few of our games. The blossoming desert table terrain is mine, but the cracking Japanese village is Daves, im sure you will enjoy it as much as i do- Thanks to Dave for all his efforts constantly improving our gaming experience.

We also have an agreement we think is handy for those regular opponents while testing new units etc;  we feel free to proxy units of a respective size/type etc to test if we want to purchase them, and we also will play with unpainted models as we make painting progress as quick as we can. This helps get new units and therefore continued interest and challenges for each of us .

I hope you enjoy the photos! They arent supposed to be anything like a battle report, ill just do a summary by each batch.

This game was Manhunt, I won roll off and chose attacker. I had performed really badly as the attacker for the previous 'confused fight' game wed played ( surrounded) where Dave had deservedly walloped me. and wanted to improve on that this time. 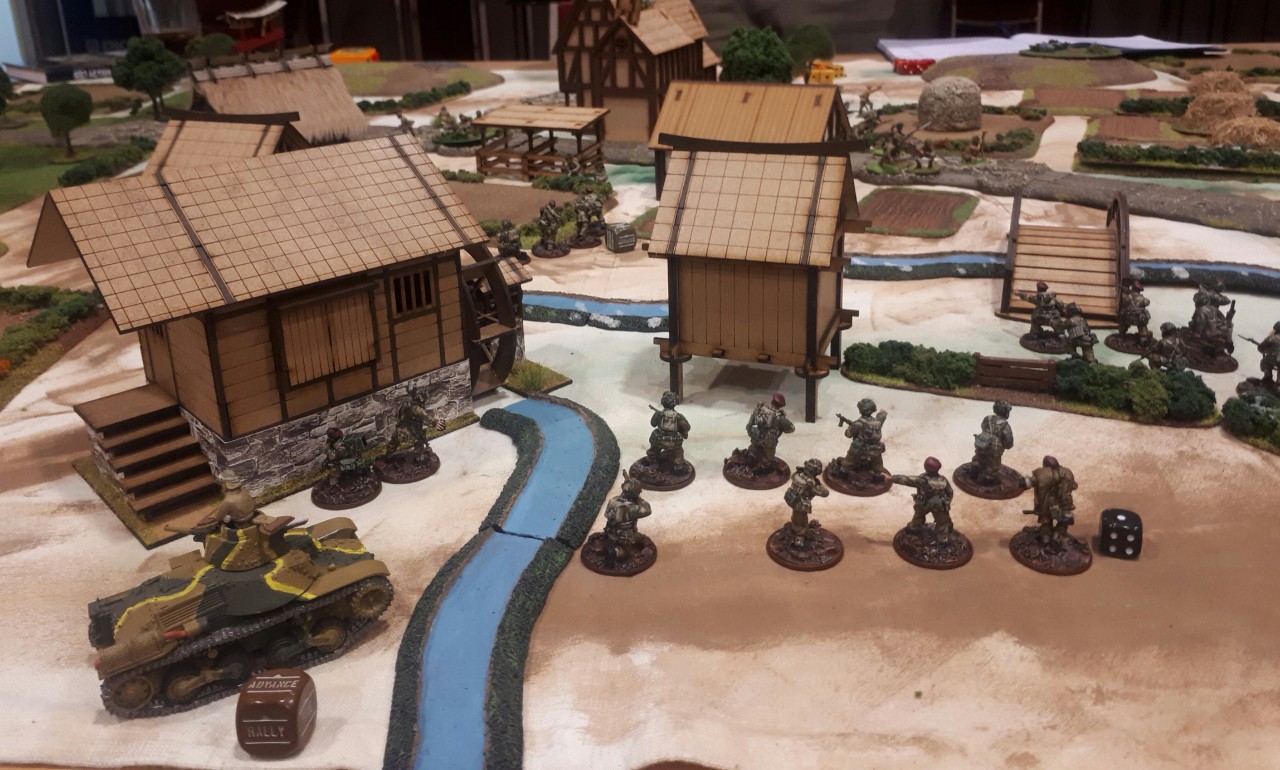 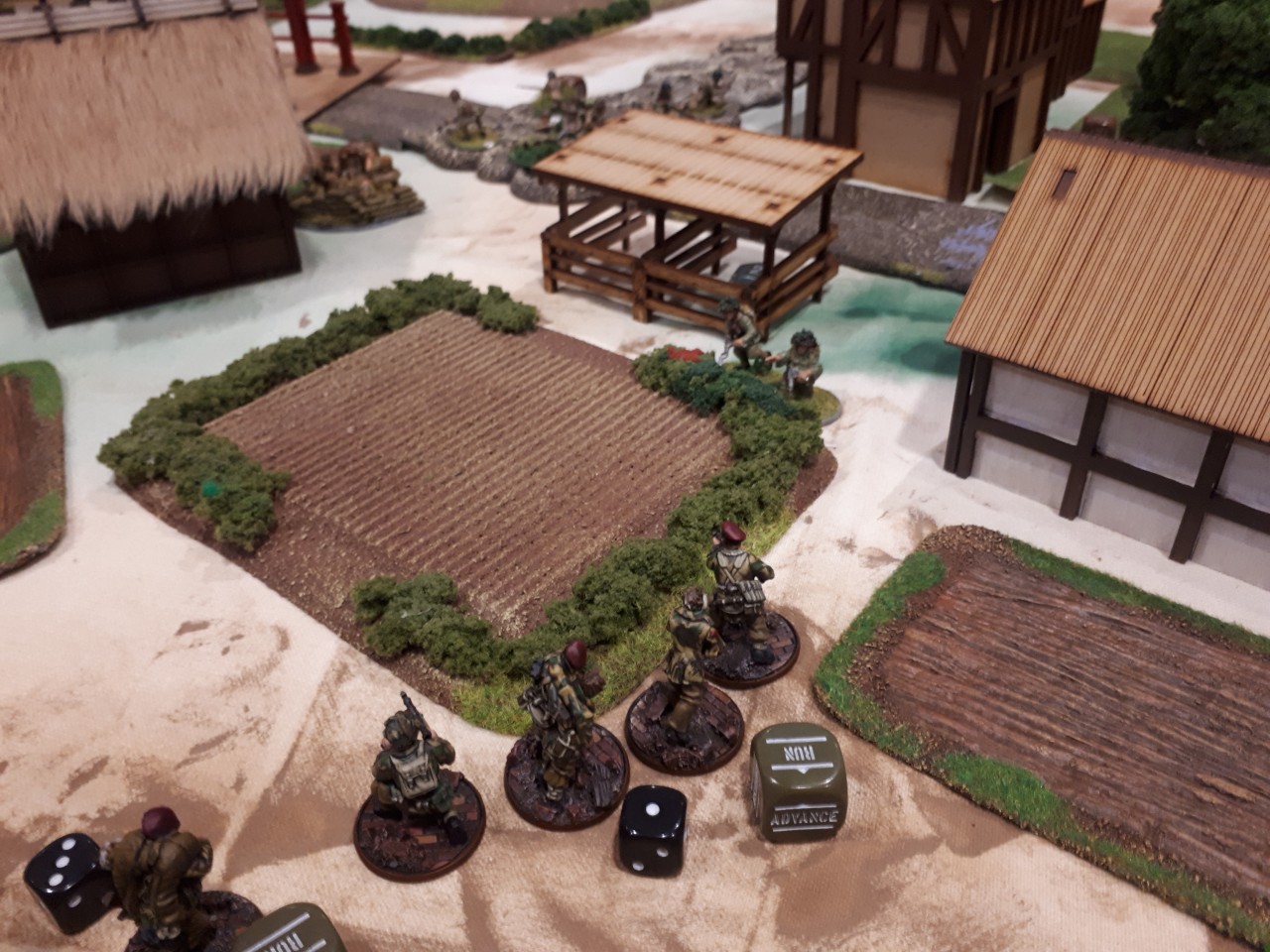 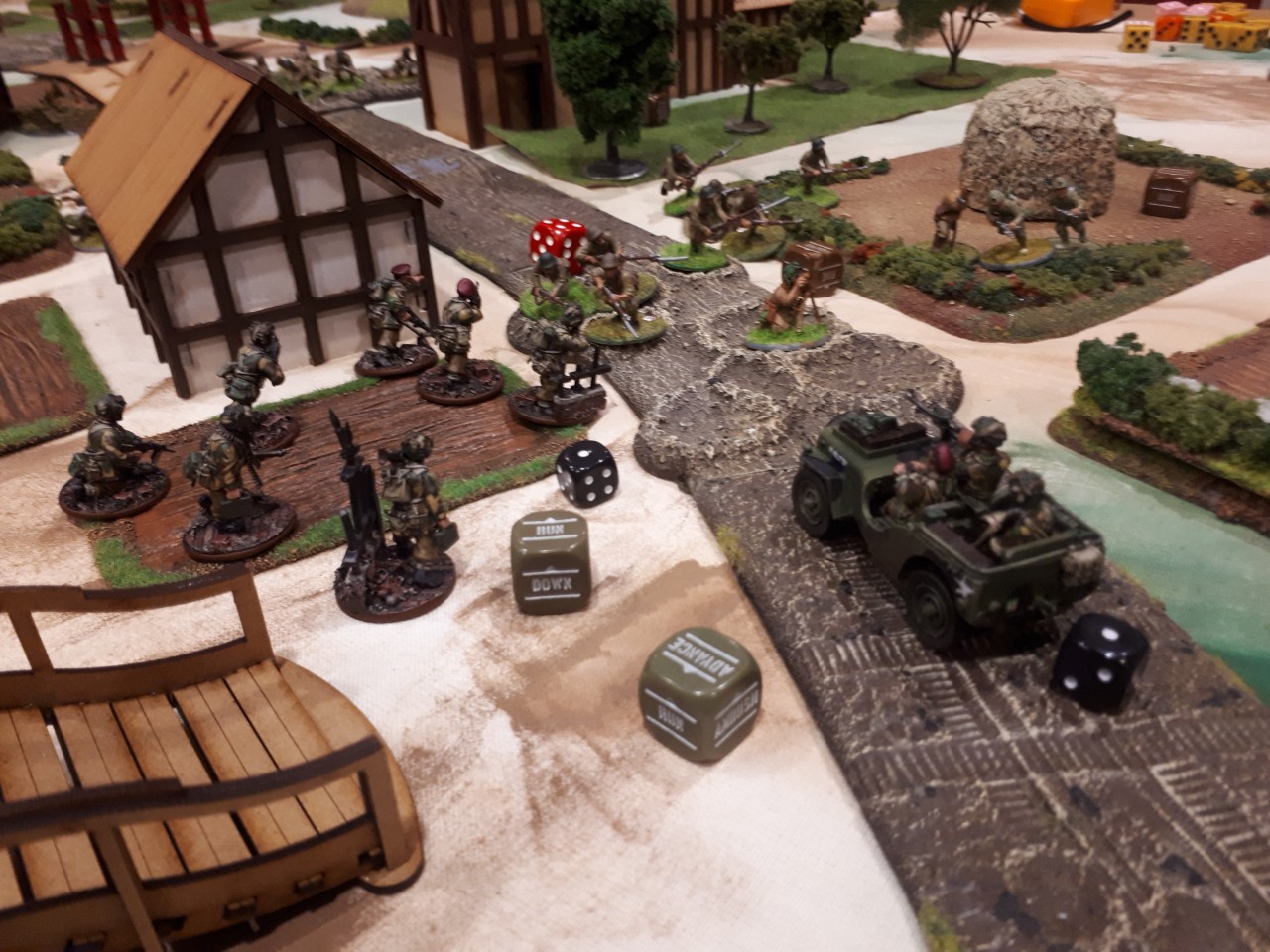 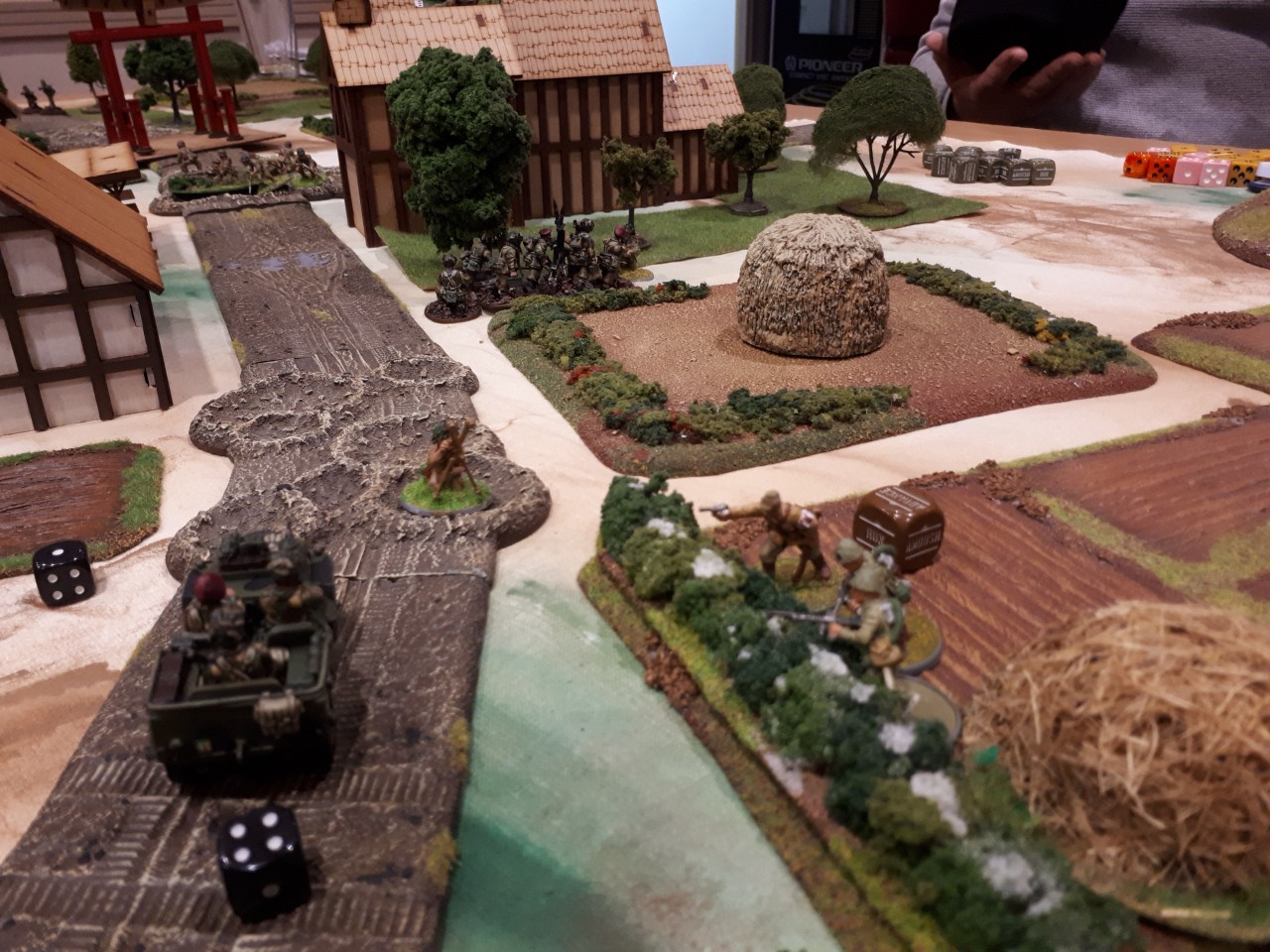 I ended up nicking this one. Id had to learn from Daves annihilation of me previously in that 'surrounded' game by deploying in better concentration, then  by attacking and application of force in a very small frontage and driving straight at his Officer into a bloody final assault ( above). I think we both learned a lot in this game.

This game was 'meeting engagement' . We both noticed that after wed deployed the terrain and THEN marked out the playing area, it made for quite open spaces and killing areas, which we were quite happy with...you can see the table layout and how the table stood during turn 2 in the first couple of photos. 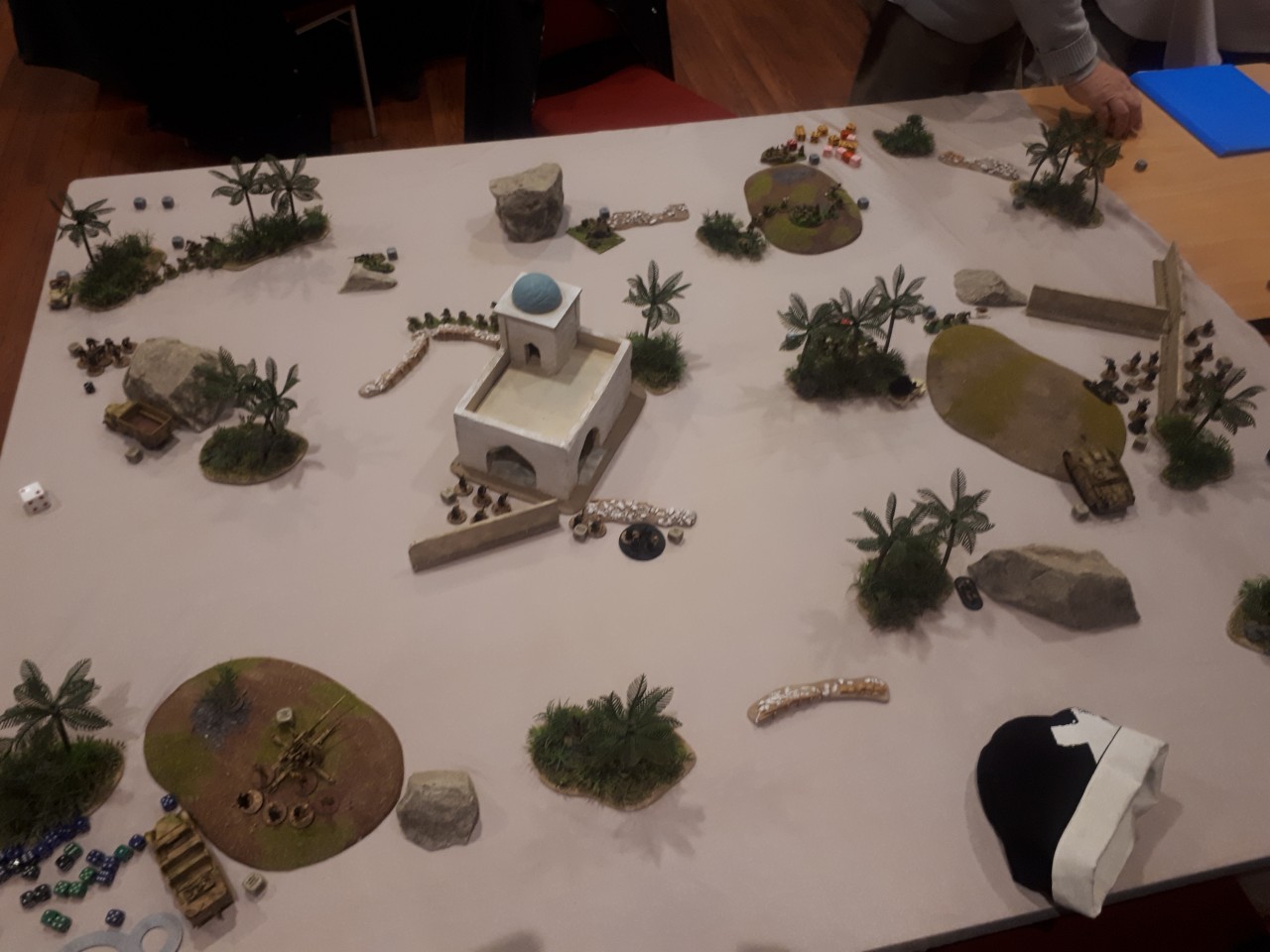 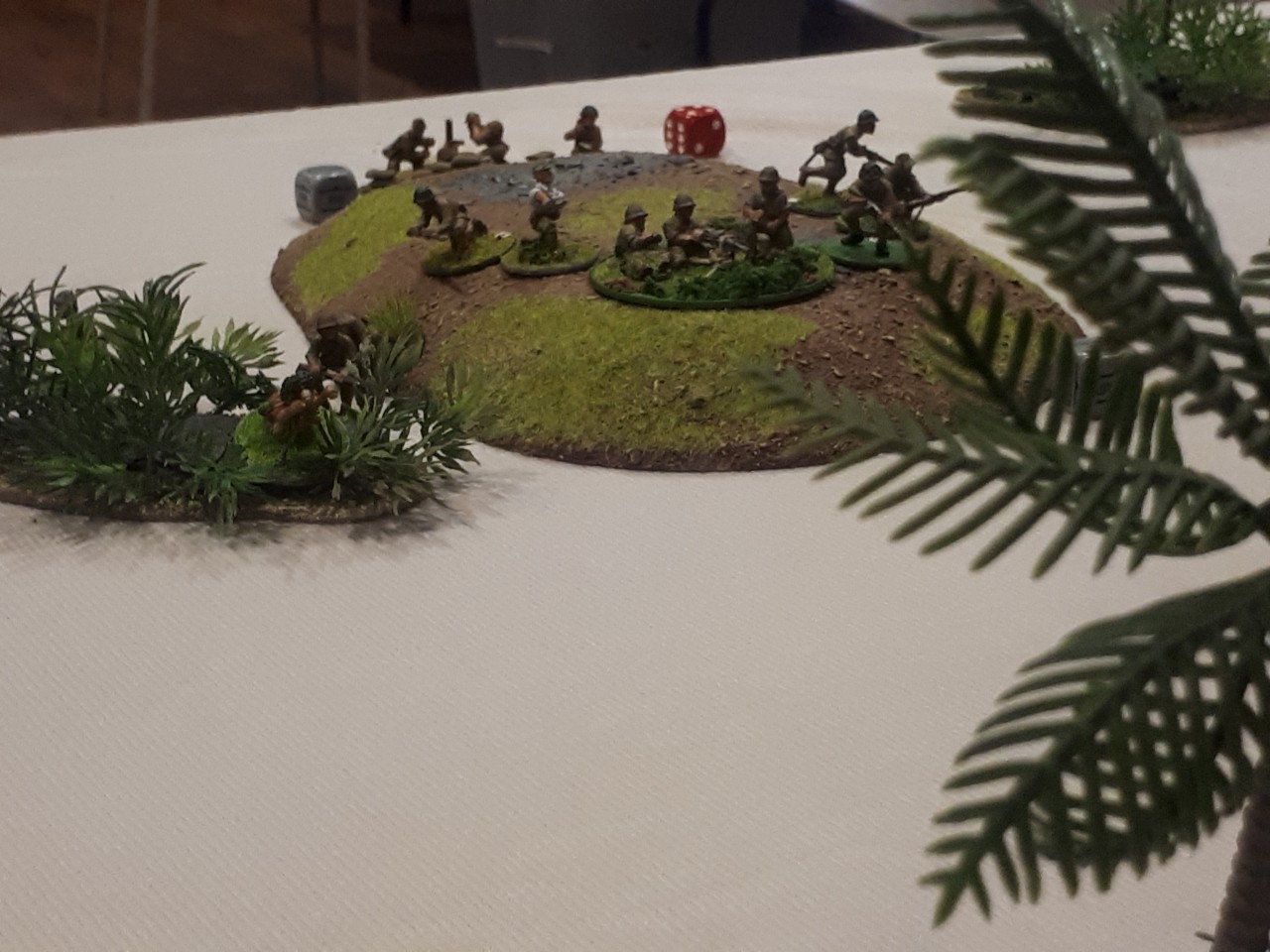 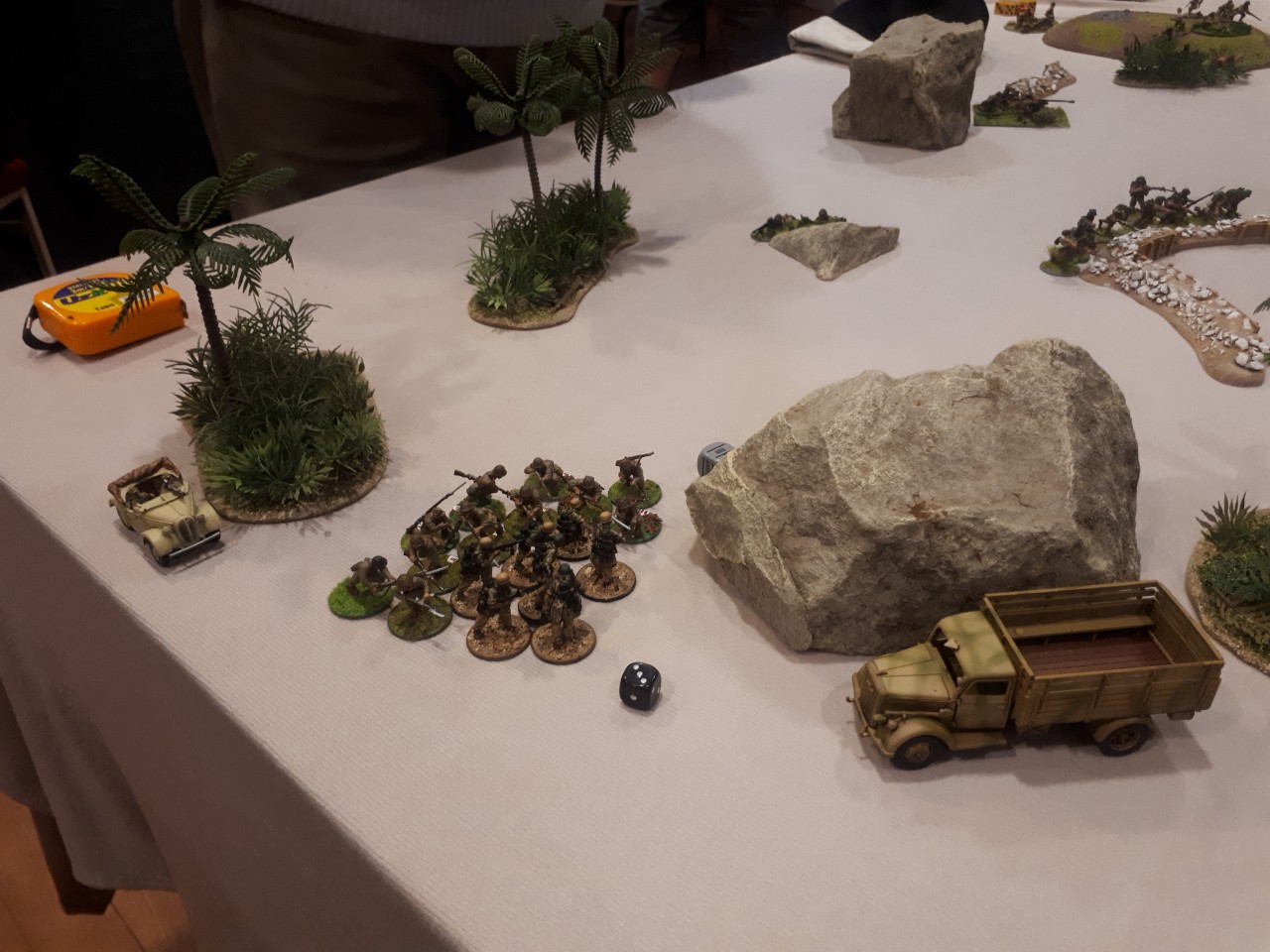 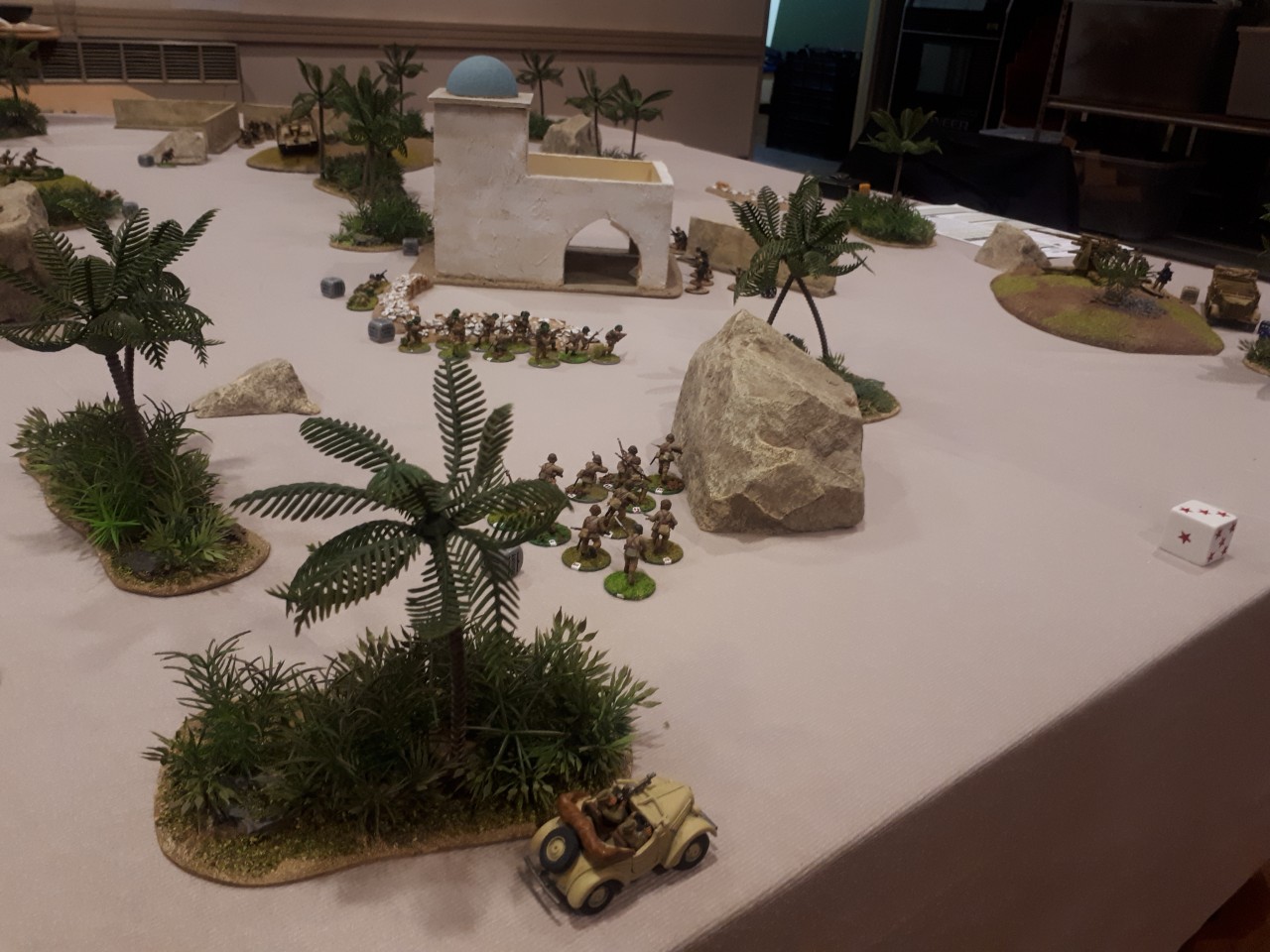 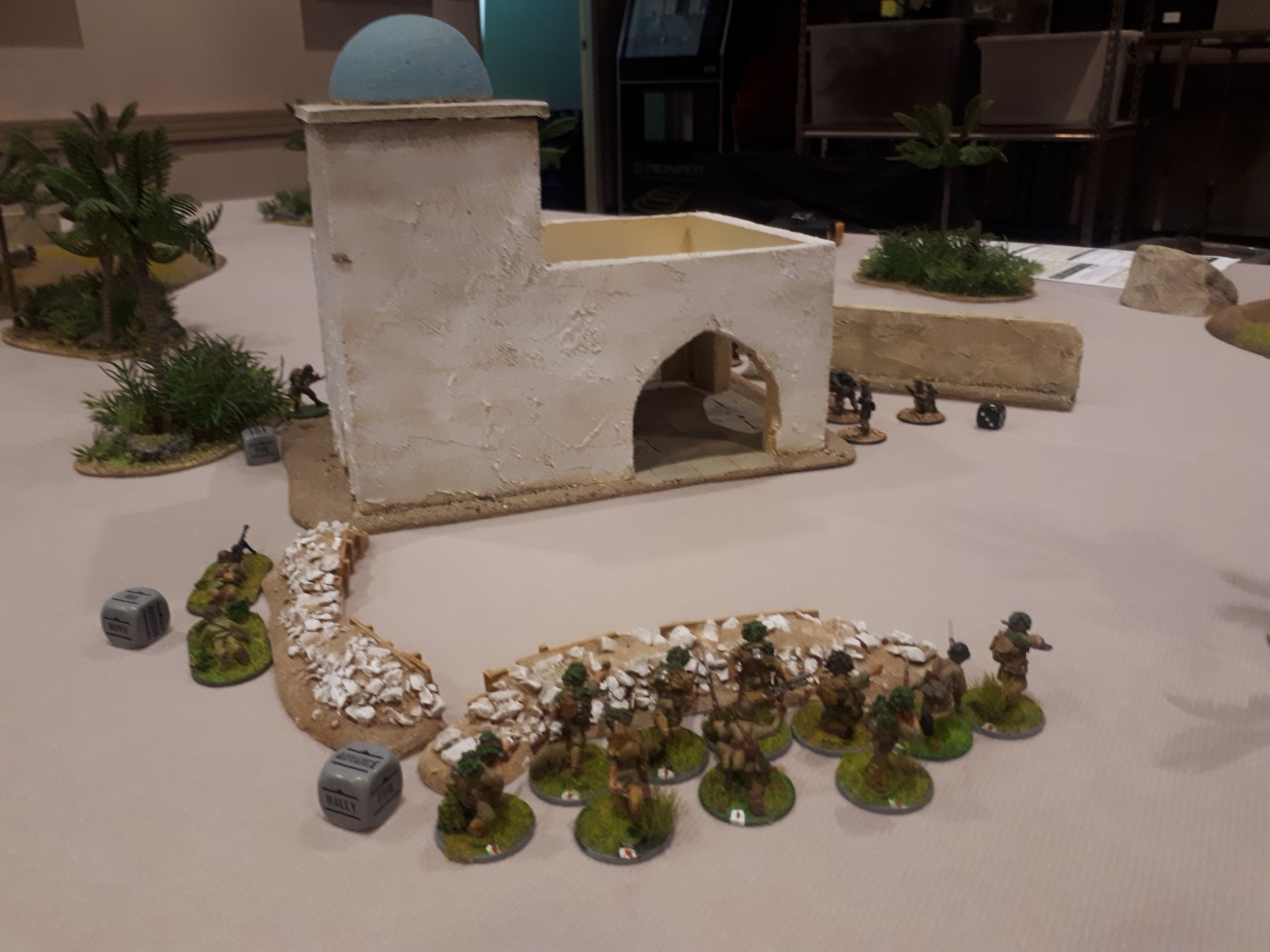 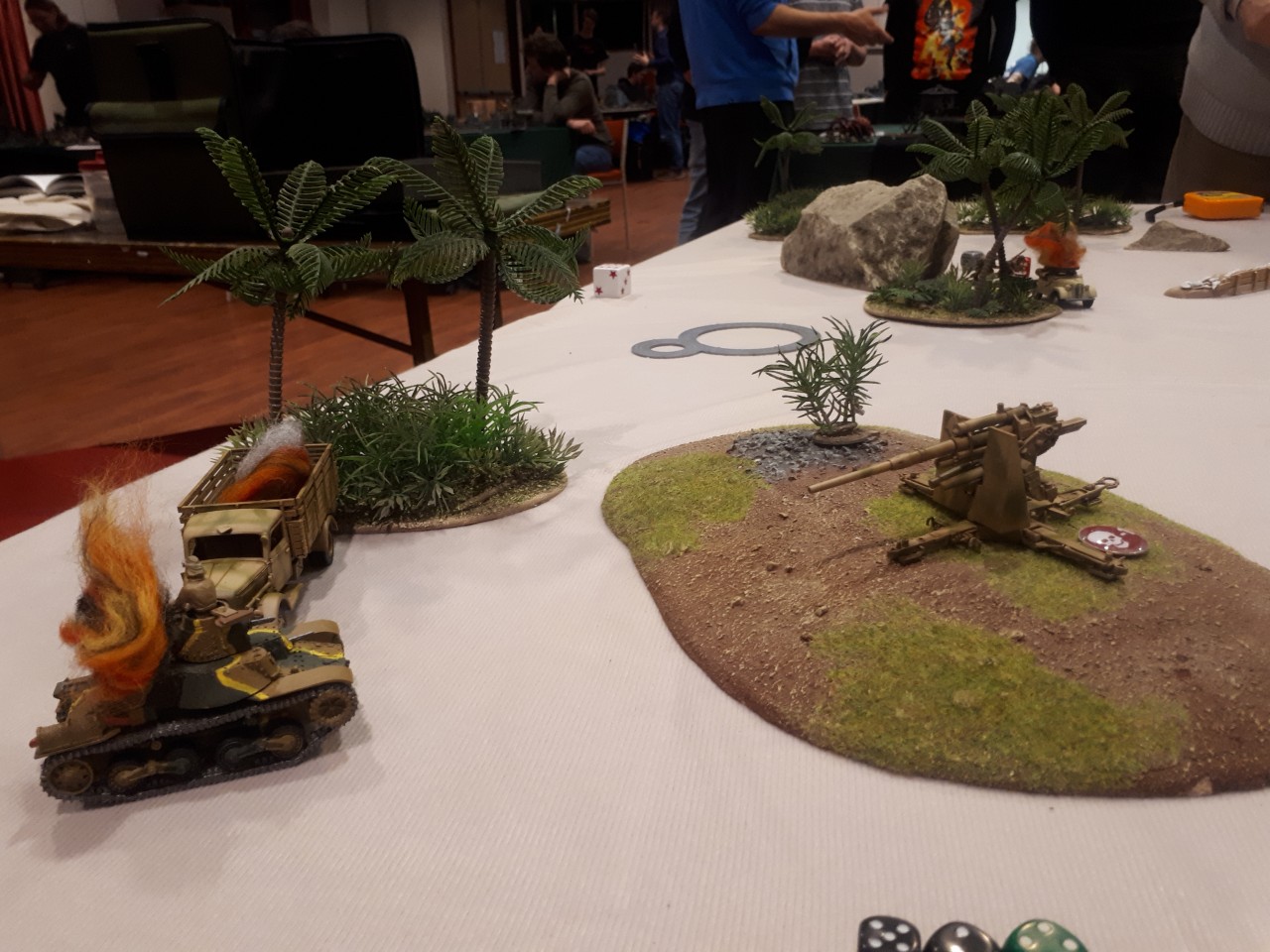 A great game, and lots of learning to be had on both sides. In my forces, i was using the 88, StuH 42 and FAO for the very first time! i also had to utilise transports  more in- role than i had used before. Some things worked, some i had to go away and think on much better.

You can see the results of Banzai charges on my unit in the open in some!!The fanatics really proved their worth here...the IJA 2 man officer squad in the open sliced and diced my 6 man FJR squad that had assaulted them to much gnashing of teeth by me-but great amusement to both of us!!. The green squad become regular, which was 'lucky'- that meant they didnt have -1 when they shot up my sniper squad next to them  after a FUBAR....!

withdrawing my transports was prudent but the flanking tank ventilated the truck and whittled down the 88 crew to the last man ...lucky he survived a behind the gunshield AT rifle shot from the top floor of the mosque and fired first destroying the tank and winning the duel!!

Daves list had some challenges in this scenario due to having some suicide lone models etc...which provided easier killpoints, but man! Those large fanatic squads just didnt care about the direct 88 fire that was nailing it..just going down while being in cover was perfect instead of breaking and giving me the killpoints.

First time id used the StuH 42 assault gun , and it was amusing as it got immobilised by the suicide stickman!!

We'd intensified the terrain a little here and again this turned out a good idea as we rolled up 'envelopment' as the mission for this game. I was attacker, which i was happy with as i needed to practice how to use the embussing/  debussing of my troops from transports. 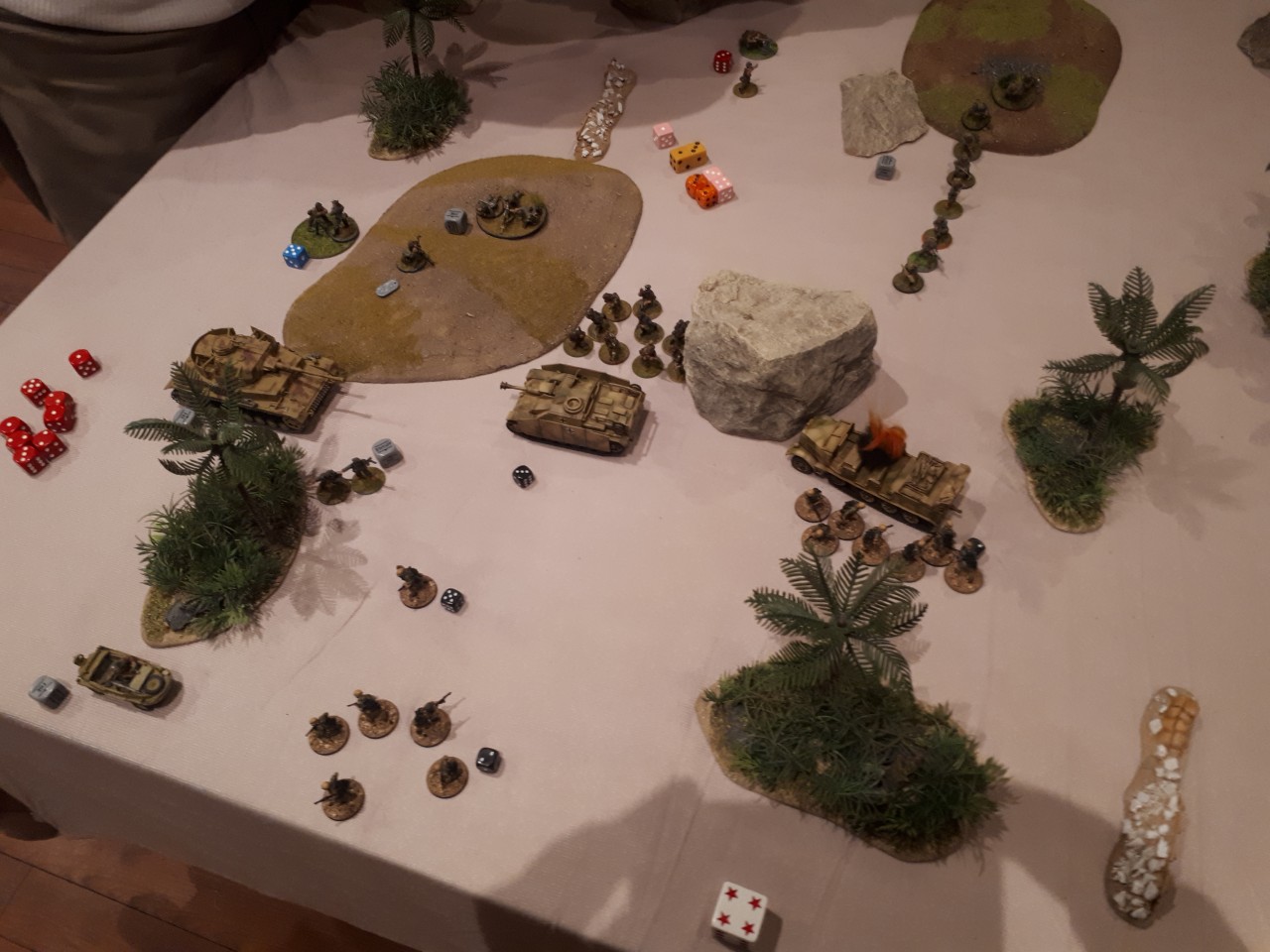 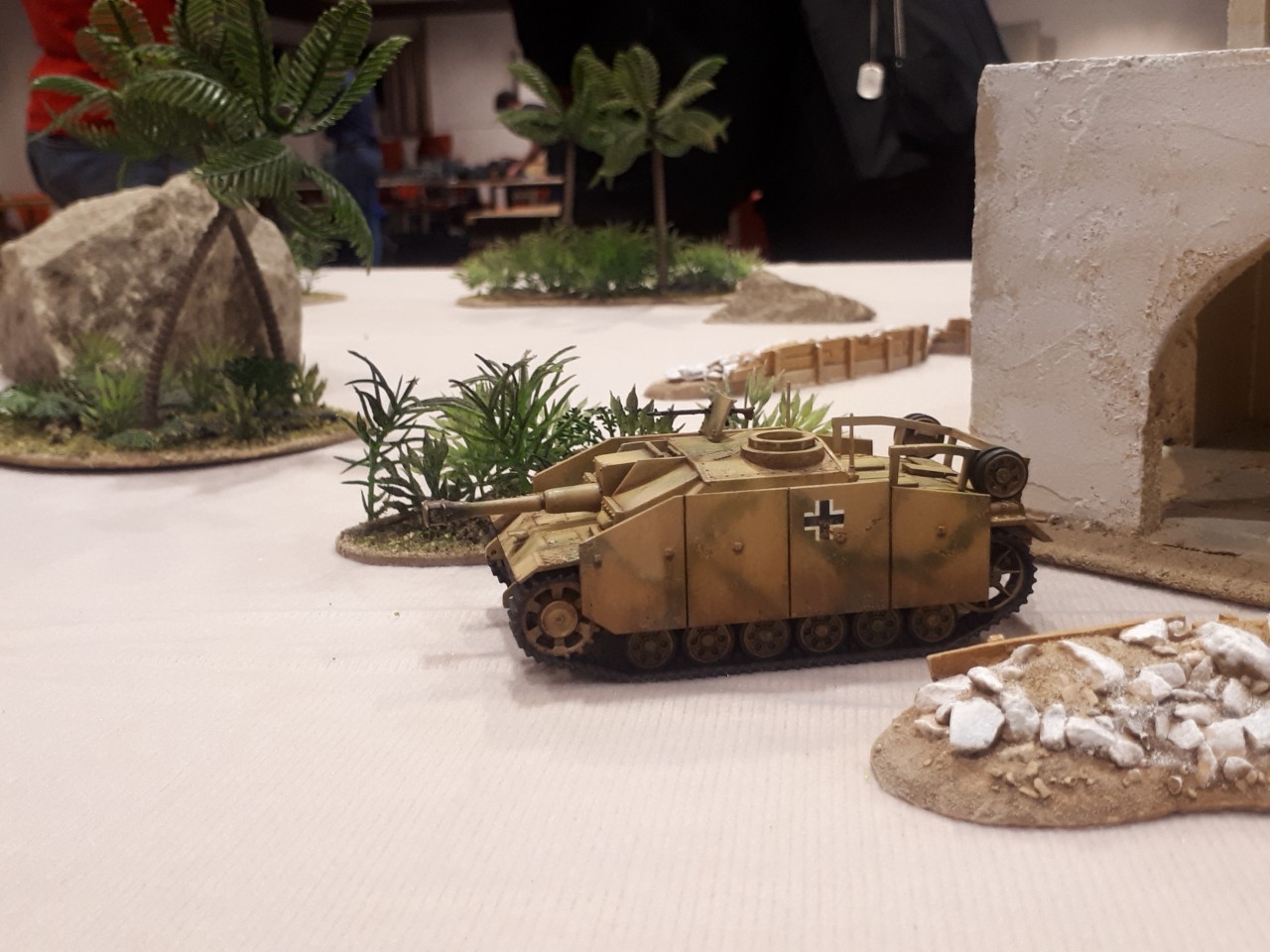 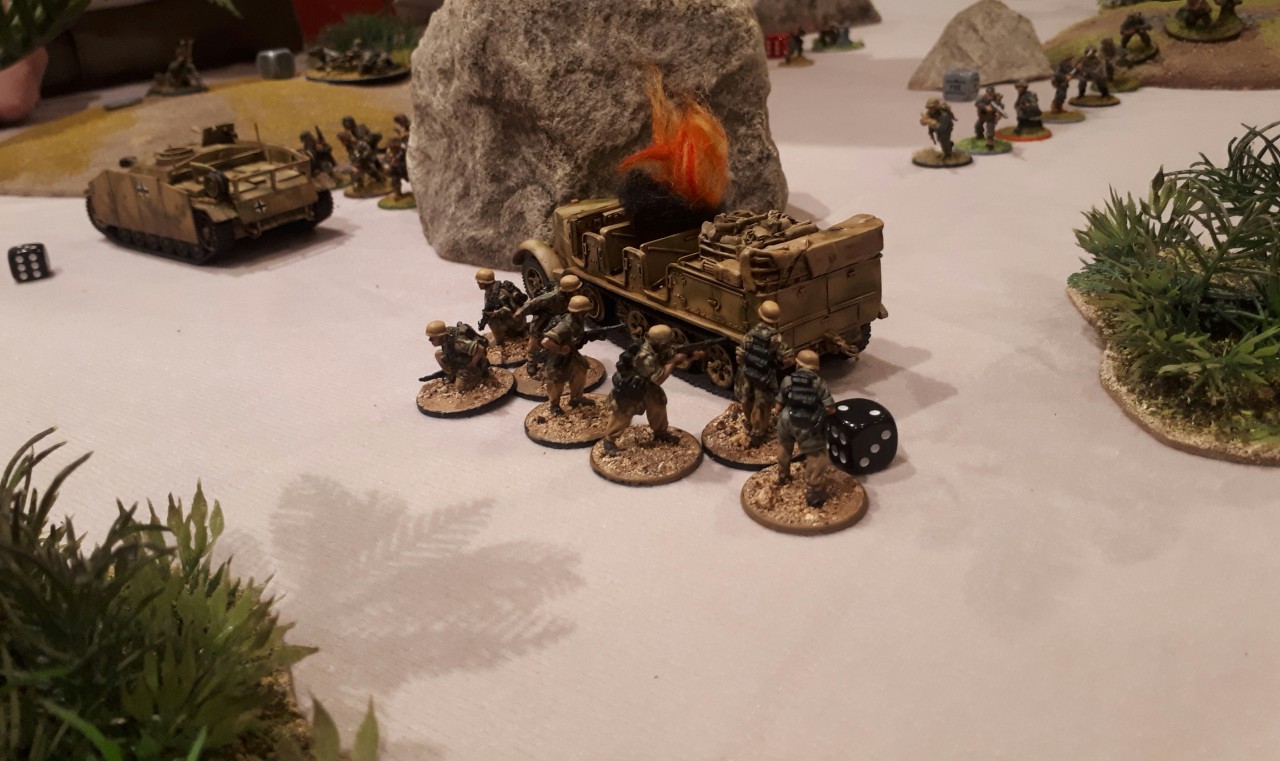 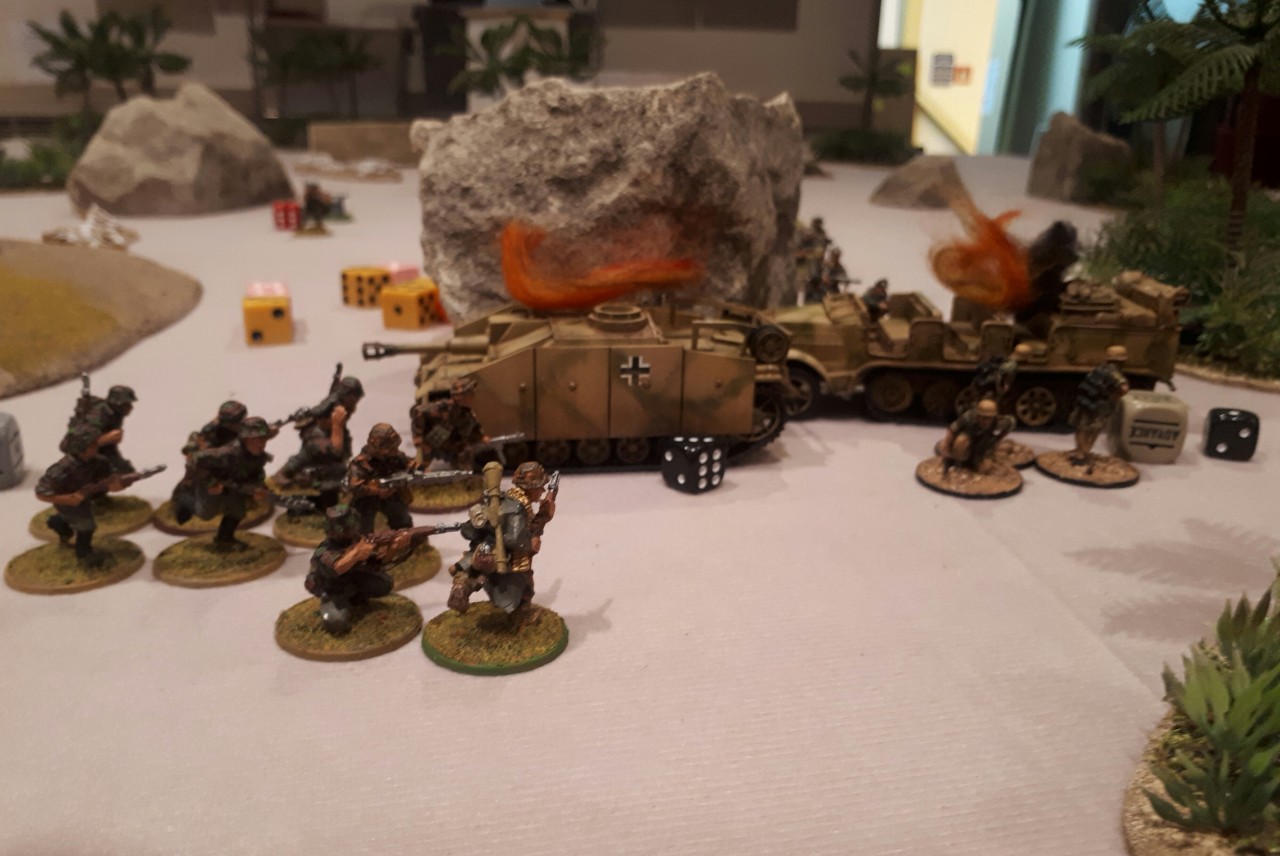 This game was the closes game weve ever fought, by agreement!  I saved my truck ( with two units of FJR mounted up !)  dice until the end of the first turn  then ran it at top speed up the narrow corridor of open ground on my extreme left flank once his units were committed to other orders elsewhere. being halfway across the board, then getting the first order dice out of the bag in second turn i accelerated of the table before Dave could plug the gap with his reserves ! the Kubelwagon couldnt quite make it off but made its way into cover to zip off start of turn 3.

now the war of attrition and cat and mouse started ...Dave had his gaps plugged and after failing a few key order tests i was dying by numbers in a killing area of Daves choosing. Luckily after i was 'certain' i had a rule right but then didnt ( check your rulebooks and understand your third party quick reference sheet may be missing only ONE but VERY important line of info!! lesson learned by me!), the game continued to hang in the balance.

Dave was very canny not only in attack - he changed direction at a key moment to conga-line directly at my Sdkfz 7 from the flank and fire a party popper of doom ( ie Panzerfaust!) into me and spoil the passengers party as they were whittled down from 2 directions ( see the pics!). Also Dave didnt throw any units away needlessly either, preserving his dice and keeping him firmly in with the chance of the draw and or win!

Only by recognising they would have to slip through the enemy lines later ( i.e withdrawing back into cover at the very back of my table edge) could i keep the snipoer squad and MMG squad alive and deny Dave the draw..what a game!! it finished 14 -12 but much much closer than even other draws had been.

This was how the scenario was meant to be played- i HAD to get my units off when i had the chance..but then i had less units and Dave had the greater dice in the bag to take the initiative against them. Very challenging but fun. Thanks Dave for all these games so far!!

Hope you enjoyed this wee summary. Comments and suggestions below.

I really enjoy this I don't know where you find the time to write such a long and detailed Battle Report!!

1 Cancel Reply
I really enjoy this I don't know where you find the time to write such a long and detailed Battle Report!!
Cancel Update Comment